Ubisoft provided us with one of the best gaming experiences I can remember in a long time. The Ghost Recon: Wildlands Hunt The Predator mission. However, it was a massive tease! Is it leading somewhere? I don’t know, time will tell. The actual mission itself was near perfection, the tense atmosphere, the background noises, the music, that glorious music! The fight itself was great too, I just loved it. In my personal opinion it was the best video game Predator adaptation I have ever played. however, after the event, I did feel teased, so I would have done things a little differently… 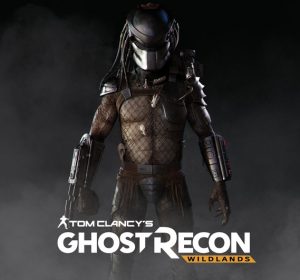 So for starters I would have made it paid DLC. Having the single mission for free was awesome, but simply put, I wanted more. So, in this paid DLC you would have gotten all the weapons, face masks, badges etc that came in the Predator weapons pack you can purchase and you get the small story missions  I will detail below.

Basic Ghost Recon Wildlands mission with your team. Travel some, get some information from a base full of hostiles you can chose to go stealth or loud. Once finished you go back to base to drop off the intel.

You get the call from an old friend in the CIA, George Dillon he would like some help to extract a CIA official who is being held by some insurgents. He mentions that they have a lot of anti air in place so you will have to go in on foot to remain undetected. Your team along with Dillon’s team of 8, head off into the jungle. During the walk to the camp you find a crashed helicopter and then find the crew skinned and hanging above. Presuming it’s the insurgents you are heading to face you carry on. You reach the base and a firefight takes place. You kill all enemies and unfortunately the official you are going to save is killed in crossfire. You notice that he is not CIA as expected but Russian and Dillon is going through documents. You confront him and he admits it was a setup and the information is what he was actually after and that the helicopter you found was the first group sent to retrieve it. You then find another prisoner, Anna,  hiding. You decide to head to the choppers to extract and “discuss” it further at base. However it’s a long walk to the extraction point.

During the walk to the helicopter Anna runs off, one of Dillon’s men runs after her and you hear some screams. You find Anna covered in blood and in shock. During a look for the body of Dillon’s man you hear a strange noise and another one of his men  drops dead with an enormous hole in his chest. You see a ghost like movement in the jungle and everyone opens fire. You then find the green blood over the forest. You decide to press on.  A few more of Dillon’s men are picked off as you move on. You make a camp for the night as its dark and raining and as you are setting down a wild pig runs through, you give chase and when you return all the previous dead bodies are missing.

At first light you decide to make a run for the chopper again, moving a long another one of Dillon’s men is taken and you decide to send Anna onto the chopper with Dillon’s last reaming man while your team and Dillon fight whatever it is that has been hunting you. You move to a clearing and after seeing the ghost like figure again and hearing distorted voices Dillon himself is picked off and then you finally see the predator. You fight it and once defeated it sets off it’s self destruct, which you have to get away from.

You and your team finally reach the helicopter finding only Anna who says the monster took the man. The team discuss if Anna actually killed him or if there could be another one of those things out there…

The actual fight in mission 4 would be pretty much the same as it was in the released version as I personally think they totally nailed it! It’s the Predator, he’s supposed to be hard! So that’s how I would have done it, a DLC bundle you could replay whenever. I figure if you are doing the Predator you should DO the Predator. A nice quick DLC pack, with replay when you want value.  I hope the Predator mission does come back one day as I would love to do it again.

Do you agree with how I would have done it, or would you have done something different?