G1 figures are an interesting thing really, beyond even the phrase ‘rose tinted glasses’. I remember G1 toys as simply being the best thing ever. No arguments will be accepted. However, 2 things need to be taken into consideration, this was 1984 when my love first started to develop, it’s now 2018. Things have moved on a pinch, the fact I accepted now is where they were great toys back then, they might not be so much now. I remember loving my Starscream figure back in the day, well, to be honest here, I loved all my figures back in the day. A little while ago I ordered the Platinum G1 seekers set, I think Amazon were basically giving them away, same with the Insecticons set. This might / almost certainly will be, an unpopular opinion, but the seekers, not really aged all that well, I have a few Optimus Prime’s from back in the day, a Bruticus set and the Dinobots but I was done with reissues.

Or so I thought.

I was browsing my Facebook feed one morning and saw a post from Kapow! Toys and something in the bottom corner of the image peaked my interest, it was a G1 Bumblebee on a card, like back in the day. I investigated a little further. The truth was a while ago I saw one of these on a keychain and always wanted one for my car keys but never saw it again, this still brought back some of those nostalgic feelings though and without really thinking about it, I had one ordered, well more than one actually.

The box arrived, I put one of the figures safe and got to opening another. 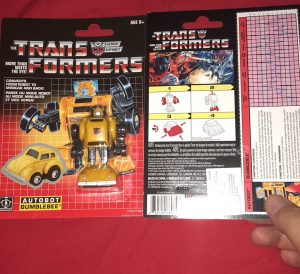 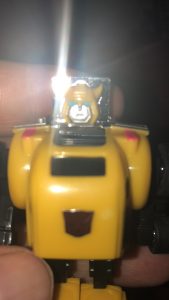 I think this figure does exactly what he needs to do, he makes me feel happy. There really isn’t much else to say about him. I’m taking him to work tomorrow to see if other fiddles with him too. The other one? Giving him to my daughter. 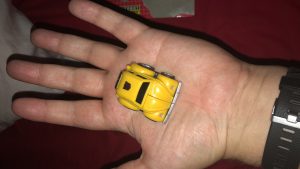