I actually really like the 2007 Transformers movie, for what it was I thought it was a really good fun popcorn movie.

However, fun as it was, I would have done it a little differently. As the rules with all the “how I would have done” pieces is to take what was presented and just make a few changes here and there to create something I think would have been better. Please bare in mind that going through this, it makes much more sense if you know the basic premise of the 2007 movie as things that happened in that movie will be refereed too.

Notes: The Autobots alt modes would remain the same as in the actual 2007 movie with the slight change of Bumblebee not upgrading to a newer model, he stays as the old beaten up Camaro for the duration. The Decepticons alt modes, mostly the same, I would have Megatron as a tank though and Bonecrusher, although I liked the mine sweeper used for him, he would be back to being a construction vehicle.

We start with Optimus Prime giving a speech about the war on Cybertron and how it was started by the Decepticons on a quest for power  and has slowly drained the planets resource of Energon, which all Transformers run on. Their planet dying and for survival the Autobots using the last of their Energon supplies boarded and launched a ship, the Ark, into space in order to find  a fresh source of Energon in order to replenish supplies and hopefully stop the Decepicons for good.  The Decepticons learned of the plan and followed in their own ship, The Nemisis, and a space battle commenced. During the battle The Ark and The Nemesis were both badly damaged by a meteor shower and the Ark gets split into several pieces and both the Autobots and Decepticons were scattered out into space. 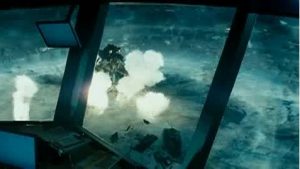 The attack on the airbase in Qatar would then take place, pretty much exactly as it does in the movie. Blackout attacks to try to steal some information. The pentagon, secretary of defence scences all stay pretty much as is.

The film would then introduce Sam Witwicky as he was in the film, starting at school then his dad taking a break from work comes to pick him up and take him to buy his first car, Porsche gag and all, all the way through to buying Bumblebee.

We see a quick scene of an F22 jet attacking a damn.

Lennox and his team fighting Scorponok in the desert remains in place as they still have the scan of Blackout they want to get back to the Pentagon.

The attack on Airforce One would reaming the mostly same with Frenzy taking information. The information he takes however identifies Major Ron “Sparkplug” Witwicky and then his son Sam and several designs for an as yet unidentified item.

We then see a large construction vehicle crashes out of a building site with several construction workers giving chase. After the vehicle has gotten away they have a quick conversation saying that building materials have been being stolen from building sites all over the this city and others.

Sam’s life continues as normal, including the scene at the lakes and giving the girl he has a massive crush on, Carly, a lift home and them agreeing to have pizza the next day. On his way to meet Carly, Sam (in Bumblebee) is attacked by Barricade trying to kidnap him, Bumblebee manages to get them 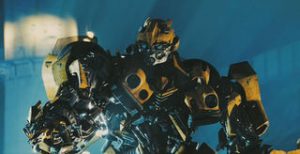 both away when they bump into Carly who thinks Sam had stood her up. Sam is trying to comprehend what is going on and why his car was able to drive itself and Carly is complaining about him not showing up when Barricade attacks again and they drive off. Bumblebee  is forced to transform in front of Sam and Carly after Barricade transforms to attack after a chase.  Bumblebee fends off Barricade who retreats. Bumblebee communicating through the radio reverts to car mode and Sam and Carly get back in.

Maggie, the data analyst from the US department of defence,  cracks the signal code used to break through the various firewalls and sees the data about Ron and Sam Witwicky and figures out that the plans are about a new type of rocket fuel being developed in secret, she mentions this to her supervisor who after a quick call advises her to get into a chopper waiting for her on the roof of the building.

Bumblebee drives Sam and Carly out of the city, into the desert for a little while and then to a mountain where the Autobots have been hiding. When they arrive all the Autobots are parked in alt mode and Sam makes a crack about the cave being a creepy truck stop, Optimus then transforms. Optimus introduces himself and explains to Sam and Carly about the war, their dying planet Cybertron and Megatron’s constant quest for power. He explains that after the meteor shower a small group of Autobots consisting of Optimus, Bumblebee, Ironhide, Ratchet & Jazz  crashed onto Earth after floating around in space for a while in a small part of their ship. Ratchet managed to get them into a functional state and they found this cave to hide in while learning about the planet Earth.  (The Autobots transform and introduce themselves, and Ratchet keeps his “mate with the female” line). Optimus goes on to tell them that Jazz has detected Decepticon transmissions and figured out what they are up to. The information they stole from Airforce One contained most of the plans for a new type of fuel and designs for the machines required to create it. They believe this fuel will work as a replacement for Energon. The project is run by Major Ron “Sparkplug” Witwicky, the Decepticons sent Barricade to kidnap Sam as leverage in order to force Ron to handover all the plans and prototypes for the fuel to them, but Bumblebee prevented this. They have not been able to figure out where they are hiding however. He also believes that they have been stealing supplies from around the country and attacking random targets and is not sure why. Sam is obviously taken aback by all of this and worried about his dad asks to be taken home. Optimus states that, although that is a bad idea he will not hold him against his will and that they will all accompany him back as he fears the Decepticons will soon make another move and maybe they can learn more.

Maggie tells the secretary of defence,  Kellor about the fuel and Ron Witwicky leading the project. Lennox’s team has been returned from Qatar and is summoned to join Kellor at the Cape Carlson airbase along with Ron Witwicky so they can all meet to discuss the situation and figure out who is attacking them. 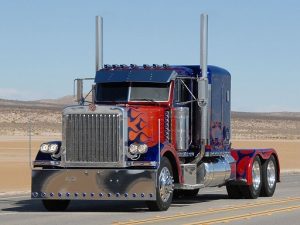 Starscream detects the Autobots in convoy and alerts Megatron. Megatron orders the Decepticons to mobilise. Bonecrusher, Barricade (with Frenzy), Brawl converge on a freeway with StarScream and Blackout flying overhead.

Sam, Carly and the Autobots arrive at an Cape Carlson where Lennox is showing Kellor Scorponok’s tail which they recovered at the end of their battle. They decide that these attackers must be after the new fuel, which they happen to be stockpiling a large quantity of at this base. Sam, Carly and Bumblebee proceed into the base complex while the rest of the Autobots remain outside, Sam tries explaining everything to his dad who struggles to believe him until Bumblebee transforms while everyone is stood in awe at what they are seeing The Decepticons then attack the base.

StarScream and Blackdown reign down attacks from above destroying many of the bases buildings while Bonecrusher and Brawl also attack from the ground. The Autobots roll in and the battle really kicks off. It is going the Autobots way until Megatron arrives. Megatron flies in lands and shoots Ironhide and Ratchet allowing Brawl and Bonecrusher to gain the upper hand over them. Optimus then tackles Megatron and they fight. Lennox and his team, although trying, are not much help.

While all the fighting is going on outside Blackout takes a large stockpile of the rocket fuel and flies off with it. Barricade enters the base and after a fight with Bumblebee takes Ron Witwicky when Frenzy threatens Sam and Bumblebee is forced to back away. The Decepticons start to withdraw and Megatron blasts a fuel tanker near where a number of base staff are hiding forcing the Autobots to help them so the Decepticons can get away.

Once the people are safe Optimus and Kellor have a discussion. Kellor concludes that although the Decepticons are clearly hostile, the Autobots are not. However, he can not guarantee that the world will not see them the same way as all agree they should be kept secret.  Bumblebee informs Optimus that he managed to place a tracking device on Ron Witwicky before he was taken and that Ron agreed. Optimus agrees with Kellor that they should strike now and Kellor calls the air force to be ready as backup. Jazz point out the Autobot badges and the Autobots roll out.

Back in a convoy they travel back into the desert where they come across the Decepticons loading a new space cruiser with the stolen rocket fuel and themselves and clearly preparing to take off. Another battle breaks out with the Decepticons using the fuel being more powerful than before and keeping the Autobots at bay. Bumblebee manages to sneak in and save Ron and get away and the Decepticons blast off. Optimus communicates with Kellor and the air force strike the space cruiser with a squadron of 24 F-22 jets. Starscream breaks out and takes a lot of the air force jets down, however the damage is done and the flaming cruiser crashes into the ocean and seemingly explodes.

The Autobots return the the airbase and meet back with Kellor. Ron is reunited with his family. Sam and Carly kiss. Lennox and his team are all returned home.

The film will close out with Optimus giving pretty much the same speech as the actual movie.

The mid credits scene will still show Starscream flying off into space.

A post credits scene would show a damaged Megatron crawling out of the ocean onto a small deserted island swearing vengeance.

So, that’s roughly how I would have done it. It keeps a small core group of characters, a few nods to good old G1, updates it for todays age, keeps it fairly low key and leaves it a little open, all a first film in a series needs to do really. Yes I cut out Simmons and all of Sector 7, but I didn’t have a place for them and I also cut Maggies friends. I am also aware I may have bent the “just a few changes” towards the end there.

Do you agree with how I would have done it or are there different changes you would have made?