This is Unique Toys Masterpiece Scale “homage” to the character of Lockdown from the Transformers Age Of Extinction Movie and put simply, this figure is something special!

So I wasn’t originally going to buy this figure, I’m not a massive fan of the movie he’s in, I don’t have many of the movie figures l and I don’t have much love for the character of Lockdown, I literally just thought he was kinda cool in a movie that wasn’t. Then I saw a video online one evening while surfing around YouTube looking for a specific video on anther figure. I think it was  Emgo, maybe Optibotimus (I have now watched both and can’t remember which one first) and I was like, damn, he does look like a good figure. A few days later I was ordering Purple Tyrant off of Kapow! to finish off my ghost StarScream and he sort of accidentally fell into my shopping basket. Pretty rough when that happens, I’m sure it’s happened to many a collector. A few days later DPD delivered my parcel.

His box layout is very simple, enormous gun down one side of the box, he is packed in car mode in the middle of the box, then Steeljaw, or robot dog whichever you prefer, is lay down the other side. 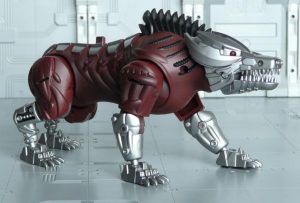 Steeljaw is not as detailed as Peru himself but, I think he’s really cute. I’d like them to maybe do a box of three of these guys as a little group would be pretty sweet. One thing to note though, the teeth are bloody sharp! Very deceptive of him, my daughter was most miffed when I wouldn’t let her play with the robot dog!

What can I say about the enormous  gun? It’s honestly huge, I’m slightly intimidated by it. It’s nicely detailed and can plug into the back of Steeljaw to carry and when in robot mode gives the look of the sniper configuration used to take down Ratchet in the movie. 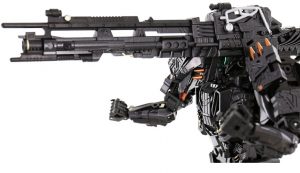 Peru also comes with a mini “seed” from the movie which to be honest will go into the “bit’s box” probably not to be seen again as well as a nice green face mask. The face mask actually represents a problem for me, fact is his face sculpt in robot mode is fantastic. This green helmet face is also really good, but it’s a case of one or the other. Sadly green helmet face will probably end up living with the seed. The final addition in the box is his claw/dagger thing. It looks mean! I would have liked him to have a spark extractor but maybe that will come along on another day. 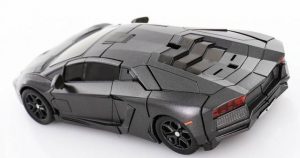 As mentioned Peru himself comes boxed in car mode. I’ve not seen a single picture that does this mode justice as yet, including this one! I think the problem is that he’s very black which is very difficult to photograph, so you can’t easily see just how great he looks in hand. He looks in the picture like he has a lot of panel lines, but they all connect and merge well enough for them to not look like a panel former when in hand. Some figures, Last Knight Beserker figure for example, fail into a horrible lose panelled mess which drives you up the wall, when you hold Peru, he just looks like a car. He scales perfectly with the Movie Masterpiece bumble and is roughly the same size when they are side by side. Looking at the underside of the car mode, you don’t instantly see robot either, you can pick out his thighs once you are familiar with them and the flat hands underneath once spotted are there, but, who displays figures in car mode, underneath up? Also, it wouldn’t look bad if you are weird enough to do this. He also has some nice details in car mode, like the little orange brake pads in the wheels. 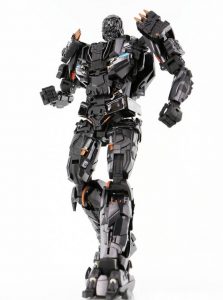 I could not describe the transformation process even if I wanted to, I’ve done it a few times and still have no idea how it does, what it does! I’ve seen a few people say black magic / voodoo / witchcraft and the like. The process does nothing to dispel any of these rumours. The car folds away and basically vanishes, arms and legs pop out and fold into shapes that they really have no right folding into. It’s a fun puzzle that when finished you actually feel like you accomplished something as when you have him in hand in robot mode, even though your own hand has carried out this action, you have no clue how it looks as good as it does. It’s stunning. I really enjoyed taking him from car to robot. Going from robot to car is a little more fiddly, again because of the black on black of the tabs and visibility of them can be a challenge, but it’s still more fun than frustrating.

He is perfect? SO close! Just underneath his knees have a tendency to pop out when moving the legs which although not a deal breaker can be a little annoying when trying to get him into your chosen pose. A tab here would have been great and solved this problem. The waist swivel is more under waist and not that swively, but these are just nitpicks really and I’m struggling to come up with more.

Now, remember when I said in car mode he scales with movie masterpiece Bumblebee, in robot mode he now towers over Bee as he should do and stands just a hair shorter than Optimus. Seriously, it has to be seen to be believed.

Unique Toys have made a special figure here and really achieved something impressive, especially for his price point too, it’s  a figure that other third party figure makers need to take notice of. The pressure is really on Unique Toys now with the upcoming Challenger figure. He will tell us if Peru was a one off or if Unique Toys are onto something magic. I’m going to be ordering the Challenger figure simply off the strength of Peru Kill, which should tell you if he is worth picking up or not!